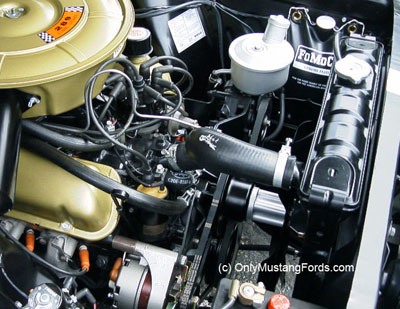 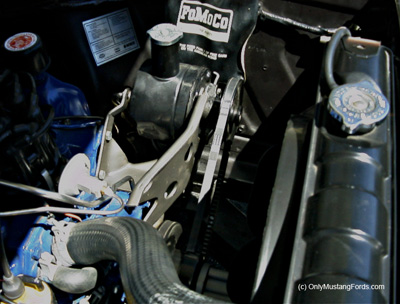 I have acquired a 66 Ford Mustang convert with a 289 V8 and automatic. It overheats easily, has no fan shroud and has a 4 blade fan.

Is this original? Or has it been put together wrong? I was told that it never had a shroud and 4 blade fan was standard on this car. Is this true?

If your 1966 Mustang convertible overheats, chances are, that it is not the lack of a fan shroud. As you can see from the pictures above, there should be a fan shroud on the cars as that's the way they came from the factory, but from my experience, very few owners and restorers actually them.

And that's not because you can't get them. They are easily available and very inexpensive from the usual sources of Mustang aftermarket parts.

From personal experience, the reason, I think you don't usually see them, is that they are a pain in the butt to put on and take off due to the small clearance areas. And are maybe an inch deep. So the likelihood that they do much is questionable any how.

That's why I say that if your 1966 Mustang convertible overheats, it's probably not the lack of a fan shroud. Instead, I would look at the possibility of a radiator that's either plugging up between the coils, with dirt and grease.

Fins that are bent from bugs, stones etc. A radiator that's on it's last legs, a water pump that isn't circulating the coolant properly, or a radiator cap that isn't holding enough pressure.

The latter case means that your engine will overheat faster because the boiling point of the coolant isn't as high as it should be without the system being pressurized.

Note: Water boils at 212 degrees Fahrenheit, but increasing the pressure in your system causes the boiling point to rise just like it does in a pressure cooker.

Starting at the least expensive possibility and working from there, you could either get your system pressure tested or just put on a new radiator cap.

Failing that, you will need to dig deeper in the areas that were mentioned earlier.

If all of these issues are fine and you are still finding that your 1966 Mustang convertible overheats, I would look at your engine timing. It may be over advanced and that can also cause overheating.