The 2015 Ford Mustang EcoBoost, Ford's all  new Ecotec engine package, one of three very major changes to the new 2015 Mustangs (more about that later). And yes, it's a good news. 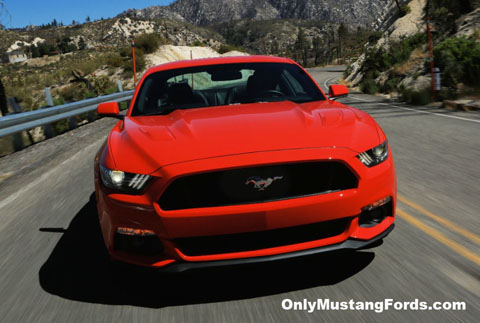 The all new Ford Mustang EcoBoost is the name of a new game for Ford's new 2015 small engine in the Mustang's engine compartment.

The new power plant not only boosts power from the new Ford's small displacement engine it delivers stong fuel economy and should be easier on the environment. It's a win-win situation for the new pony car. Or is it?

You might be wondering exactly what Ford was thinking when they decided to again put a 2.3 liter 4 cylinder engine in a Mustang (remember the econobox Ford Pinto derived Mustang 11) ? Sure, we get it. A small engine with great fuel economy, but you pay for the mpg in lousy performance and a noisy, high strung little engine.

Nope. Not this time. Even with a vehicle weight of 3,532 lbs, this turbocharged inline four, churns out an extremely  surprising 310 horsepower, and even more surprising 320 lt-ft of torque.

Compare that to the last turbo 4 cylinder in a mustang, the SVO turbo of 19-- which at the time was more powerful than the 5.0 liter option at 190 horsepower and the rather hefty assembly becomes a lot more agile! 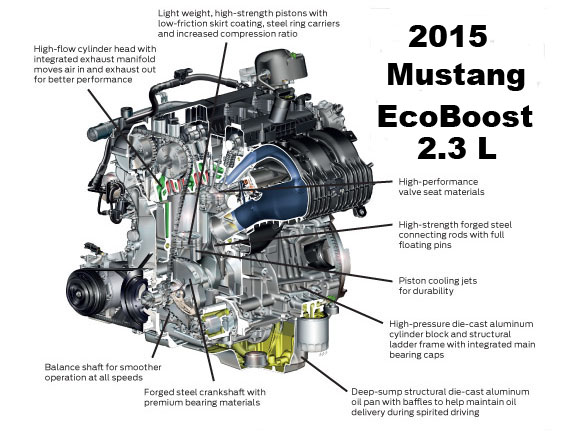 This little Ford Mustang Ecoboosted Ecotec engine is number one on Dearborn's all time list for horsepower per litre. Looking at the numbers, the new engine puts out 124 horsepower per liter. Imagine that in your grandma's little Pinto.

Forgetting about the all new suspension and handling improvements, to go along with this all new engine, power to weight ratio sure defines a car's personality on the road. Whether you like gunning it out of a corner, or shredding tires off the line, that seat of your pants feeling is largely determined by the power to weight ratio.

That is, how many horsepower for every pound of car it has to push down the road. The old standard for a really quick muscle car was 1 horsepower for every lb of car. The new 2015 Ford Mustang Ecoboost engine in this 3500 lb car works out to .94 horsepower per lb of engine, putting this new "economy Mustang" solidly into the performance car category

The other now important comparison, is with Ford's other smaller (bigger than the ecoboost) engine option, the Ti-Vct V6. Here is yet another example of what wonders adding a turbocharger to an engine can do.

Only a few years ago, the new V6 Mustang engine set new ground for a non V8 pony car, with fantastic fuel economy with almost 100 more horsepower than the previous V6 cars. Torque was up considerably at 280 lb-ft., yet the new 2.3 liter ecotec/ecoboost engine, with 1.4 liters smaller displacement, produces 40 lb-ft. more torque than the significantly larger V6.

The ecoboost Mustang engine takes advantage of both, cutting edge and tried and true performance technologies. Direct injection provides a fine mist of atomized fuel directly into the cylinders for maximum efficiency from every ounce of fuel. This produces more horsepower and better mpg.

Twin Independent variable camshaft timing helps to deliver a flatter torque curve and squeeze every ounce of performance from every rpm and load.

While force feeding an engine with a turbocharger has always been able to produce increased performance, smooth seamless power was not one of it's benefits. Turbo "lag", a phenomenon causing a flat spot when you put your foot into the pedal led to a lag, followed by a head snapping increase in velocity as the turbo spooled up to optimum output.

The other major departure from typical engine building design is the 2.3 inline four's integrated exhaust manifold, designed to separate the inner and outer cylinder pairs into the two different inlets on the turbo effectively smoothing out the exhaust pulses to the turbocharger and in effect mimic a twin turbo set up. Interestingly, along with the desired performance bump, the system actually improves fuel consumption compared to a typical single turbocharger system.

Of course, this being a Mustang engine, not some cool little econobox, Ford's engineers knew that this motor would be used for shall we say "spirited driving" and had the good sense to build the little four cylinder screamer with the same heavier duty features seen in the impressive 5.0 liter V8, including goodies like a forged steel crank, piston cooling jets, high performance hardened valve seat, forged steel rods and reinforced bearing caps.

Beyond the likelihood that much thought on selling a 4 cylinder engine to a car usually equated with a big American V8, had to do with the 2015 Ford Mustang EcoBoost model becoming again a "world car" that would be sold into countries prohibiting any engine over 2.5 liters, the quest for better fuel economy was a big factor.

And with a US EPA fuel economy mpg of 21 city, 32 highway and an overall combined 32 mpg, this turbo screamer makes a very stong statement as an awesome looking, tire smokin', tight handling economy car, you can be proud to own.

Return from ford-mustang-ecoboost to 2015 Mustang