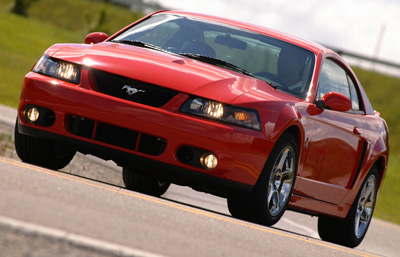 Hi. I have a question and hope you can help. My 2004 Ford Mustang Cobra has oil in the expansion tank. It has never over heated, there is no smoke and there is no water in oil. Could this problem be my oil cooler. Please help asap!

While it's difficult to diagnose an issue without seeing and testing your Cobra, we can look at some possibilities. The oil cooler assembly for the 1996 to 2004 Cobra and Mustang GT is fairly well known for issues with leaking, which can account for the oil in your expansion tank.

There are a number of O-rings in the assembly, including an O-ring for the center pin, O-ring for the coolant passage seal and another one for the oil passage seal. As you can imagine, if you have leaks in any of these areas you can get transfer of fluids, causing the condition that you describe.

Ford makes a replacement kit including the pin and O-rings. As well there are a number of aftermarket leaking oil cooler service kits that will work to seal up your 2004 cobra oil cooler.

From what I've seen, a number of the aftermarket kits include additional parts that you would have to purchase separately from Ford at additional cost, so do your homework.

Also, since you have to have the assembly removed anyways, you may want to replace the three other oil cooler core O-rings, which are only available in the aftermarket. Ford seems to think that you would prefer to spend over $400 for the cooler which has nice shiny new ones included!

Note: with the efficiency of the current emission control systems, you could have a head gasket leak and not see smoke, so if, after checking out the the oil cooler assembly, gaskets, shaft and O-rings and this doesn't fully address the issue, you should look at getting a compression and leak down test to futher assess whether there is more to this than simply a leak.