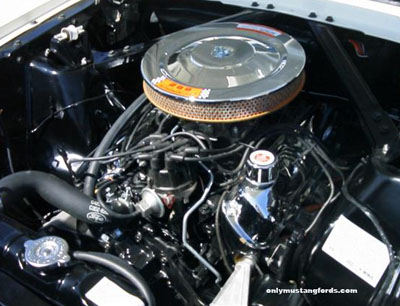 Also, doesn't that tell me the engine was actually built in 1964? Thanks for any help on this.

Good questions. But this will be a bit of a complicated answer...

You can identify a Hi-Po (high performance) engine and even the original car that it came from, by checking out the casting numbers in various places on the engine block and heads plus finding the vin code stamped on the block.

The original vehicle identification number was stamped, not cast into the engine near the oil pan, usually fairly close to where the negative battery cable is attached. These are not easy to spot sometimes, depending on how well they were hit with the punches.

As far as which block is which, there were a couple of different ones used for the K code engines. Early high performance blocks typically had the number C4OE-6015-F, while later ones were C5AE-6015-E

This casting number is located at the lower edge of the oil pan surface. The other alpha numeric combination, cast just in front of that block number is the block's production date.

If this engine was a "numbers matching" engine, meaning, the original engine installed into this particular 1966 Mustang fastback, then there will be stamped vin number matching that of the car.

The good news is that this is the right block for a high performance "K Code", but according to all the information I have, it should be in an earlier car. A C4 block, which shows up in a 1964 1/2 car (early production)and has a 5 bolt bellhousing.

So although it's not original to the car, it is the K code block. And you are right, with a date code of 4 this engine was manufactured in 1964.