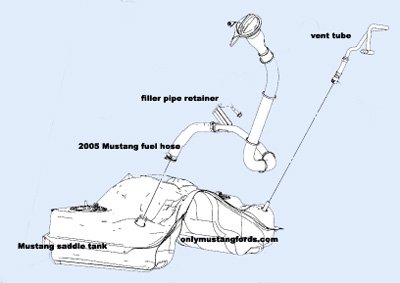 Question Re: Gas tank Filling Problems On A 2005 Mustang

Can I replace the vent tube on the gas tank? Or do i have to replace the the entire tank assembly?

Boy, have you opened up a can of worms!

I'm going to spend some time on your question, because chances are, the vent tube isn't your actual problem.

Gas tank Filling Problems On A 2005 Mustang are very common. And to some extent you can also have them on the 2006 and 2007 models.

The real issue with the 2005 Mustang V6 and V8 powered GT cars, starts with filler tube angle and escalates from there to needing to replace your gas tank.

I've been fortunate in not having had this issue on our 2005 Mustang convertible, but it's very common. And I've seen the very same problem in the F350 diesel trucks from the mid 1990's.

Slight differences in the length of the filler hose from the filler door to the tank, or the way it was mounted can cause virtually the same issue.

There is very little clearance for the filler hose to the saddle tank, so even slight differences in angle of the hose can cause problems for filling, which will appear to be a vent hose issue.

For most Mustangs, that equates to trouble filling the tank to full, or having it click off numerous times before being able to fully fill the 2005 gas tank.

If your evaporative control canister or it's components have any clogging issues interfering with the canister vent solenoid's proper operation or you have a plugged EVAP canister filter, it can tell the fuel tank pressure sensor that there is excessive pressure (meaning the tank must be full).

Early 2005 production has an issue (design I assume) that can cause difficulties in filling up the tank without issue. There is only one fix for this, but it is covered by Ford under a TSB, which is detailed below.

This became a big enough problem that Ford issued a technical service bulletin, which details a fix for the problem that will be provided at your local Ford Mustang dealer, which I will reprint below.

Note: There are issues dealing with early 2005 Mustang gas tanks separate from the later 2005, as well as 2006 and 2007 Mustangs in this bulletin. You may still need to look at the possibilities listed above, to fully get a satisfactory result.

Here is the TSB for Gas tank Filling Problems On A 2005 Mustang:

This article supersedes TSB 06-3-13 to update the vehicle model years.


The automatic shut off in the fuel fill nozzle may trigger multiple times after delivering several gallons of fuel or it may trigger repeatedly when attempting to establish fuel flow into the fuel tank.

The latter concern may be more common when adding fuel to a vehicle where the fuel level is at or above 1/2 full.

On 2005 Mustangs vehicles built before 4/26/2005 that experience premature automatic shut-off of the fuel fill nozzle more than occasionally may benefit from replacing the fuel tank with a revised design tank per TSB 05-15-12.

The revised design fuel tank may reduce the occurrence of premature automatic shut off.

As a result, replacing the fuel tank on these vehicles will not change the occurrence of automatic fuel fill shut off.

Occurrences of premature shut-off may be resolved or improved by using a different filling station fuel pump.

Unauthorized modifications and/or alterations to the vehicle are not reimbursable under warranty and are not recommended for this issue.

Bottom Line:
Use this information first, and see where your car fits into this TSB information and see your local Ford dealership's service department.

Quote the TSB number and see what happens. If you don't have satisfaction, you can certainly push them to look at the other issues outlined above.

B.
Return from Gas tank Filling Problems On A 2005 Mustang to Ford Mustang