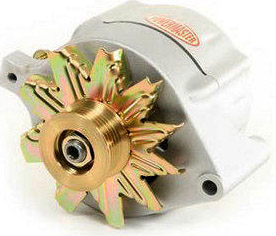 What alternator (brand, rating, etc.) would you recommend to replace the original?

I need a bit more oomph as I am running more electronics (stereo, etc) and with a new battery it still does not seem to keep it charged.

Well, first off, a stock Ford Mustang alternator replacement, typically has an output in the area of 40 to 50 amps.

Here's the one I like. It's a direct fit 1965 Ford Mustang Alternator

At 140 amps, it's almost three times as powerful as a stock replacement, Nice too, it comes with a one year warranty and has a stock looking appearance.

It should take everything that you can give it and then some. The link above has all the details and price.

By the way...If you're not looking for something with a stock appearance, they also have a matte black version, rated at 140 amps.