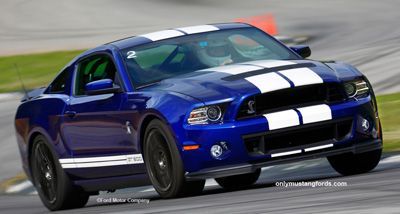 Who says Ford can't build a supercar that seats four comfortably and can reach 60 mph in 3.5 seconds and corners like it's on rails without an independent suspension.

Driving The Fastest Mustang Ever

If you've ever driven any muscle car before traction control, you might wonder about the wisdom of equipping a rear wheel drive domestic GT with even 400 horsepower and ever having the opportunity to get even 50% of it to the ground, much less using it to power out of a hairpin turn.

But this new Mustang... ahem Shelby GT500 not only makes that horsepower level seem inadequate, but actually gets it's incredible 662 horsepower and 631 lb-ft of torque grabbing the asphalt in a manner you'd usually expect from a well turned out turbo 911.

And that is probably the greatest surprise in our 2013 GT500 first drive. A powerful all-american muscle car at it's finest, yet with new found sophistication, making the 2012 incarnation another significant step up the evolutionary ladder.

Getting away from the grocery getter, typical handling, you'll find this year's car a refreshing departure. Initial turn-in is a bit sharper, with noticeably less understeer, making the car, at higher velocities, much more controllable. My first impression, was that this, much like a good Porsche 911, makes it easy to drive this car well.

Hang the tail out (easy to do with 600 plus horsepower) a-la drifter champion Tanner Foust and the results are much more predictable than the 2012 cars.

This is a car that unlike a Mustang GT, Camaro, Challenger and other contenders, is relatively easy to drive at or near it's limits.

Too bad there's no place but a race track to really explore these limits legally.

Sophistication in handling and manners are not terms usually associated with Detroit iron, but this car really is a world class car, deserving of the praise it's getting everywhere.

At it's limit, the car corners at 1.01 g, holding the line nicely till you hit the loud pedal and exit your corners. 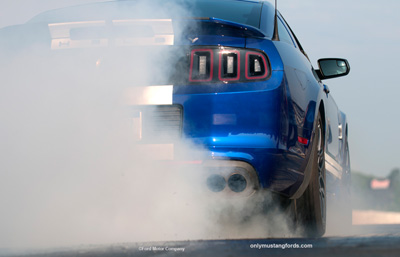 At the drags, you'll notice some cool stuff to play with, like the "track app", which this year adds to the features first offered in the Boss 302, including setting your maximum launch rpm and letting the on board computer to figure out just how much clutch to engage to get the best acceleration without turning the tires into candles.

Using the app, simply set your max rpm, lift off the clutch, hit the throttle and the computer figures out how to get the most power possible to the ground. Figure out how much the track can take and make your next run.

Forget about that 3.5 seconds to 60 mph, what does it run in the quarter mile? How about 11.6 seconds and a 125 mph trap speed. That's almost a second quicker than last year's car.

Gear change is slick and although the clutch pedal effort is a bit higher than last year, due to the stronger springs and beefier/ bigger clutch disc, it's not the kind of thing that will wear on you in traffic like an old time Hay's drag clutch.

Check out the video below featuring some close up shots and on-track footage of the 2013 Shelby at Formula Atlanta.

The overall 2013 Shelby GT500 first drive impression is a very capable, refined sports car. Attention has been paid to fixing some minor issues from last year, as well as improvements in areas that already worked well. Changes in ground effects and splitters improve downforce at the front and rear to enable the car to live at it's 200 mph limit.

Yes you read that right. The new Shelby Ford Mustang was redesigned for stability at it's target top speed of 200 mph. Oh, I can hardly wait to see this one running against the Ferrari's and others in "Supercars Exposed".

And I can't help thinking, what if... you put a different pulley on the supercharger to get even more boost? Hmmm....