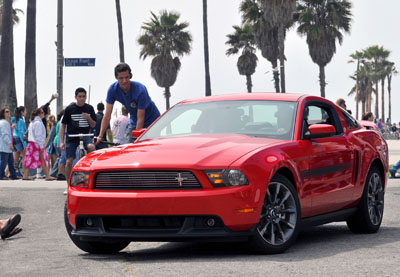 Could the fenders,hood,bumper & cover,headlights be a direct bolt on to my 2008 Mustang GT ? If so,where would be the best place to buy the components.

I can understand why you'd like to do a 2008 to 2010 Mustang front end swap. The new lines are cool and much more muscular, compared to the previous series from 2005.

While the underpinnings will not be that much different (ie. inner fenders, upper fender apron flanges)the bigger picture and issue with swapping the new 2010 Mustang fenders and hood onto your pony car, is going to be matching the contours of the new front fenders with the rest of the car's lines and curvature.

Assuming that you are fairly skilled at doing bodywork and some fabrication, I'd say the best way to get a good idea about how much work it's going to take to do a 2008 to 2010 Mustang front end swap is to see if you can find at least one 2010 Mustang front fender at an auto wrecker.

Pull the corresponding fender and the front bumper fascia off your convertible and with clamps or maybe a couple pairs of vice grips clamp the new fender onto the car. That way you'll be able to see just exactly what you have in store for yourself.

Backing up a step too, remember that the front bumper fascia is not likely going to mount exactly to the old bumper holes and some massaging of the actual bumper materials, or even the whole front bumper assembly may need to be replaced with a 2010 bumper.

So whether that's making a long story short or a short story long....

The bottom line is that by itself, doing a 2008 to 2010 Mustang front end swap is possible, if you have the necessary skills to make everything match, whether that means fabricating brackets or bodywork and working out any small wiring issues that need to be resolved.

So, direct bolt on? No. But possible ? Yes. And if you do decide to make it happen, be sure to take lots of pictures and I'll make sure we get your car and front end swap up on the site.