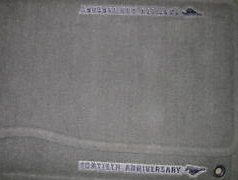 Got a 2004 Mustang GT with a Mach 1 rim and sound system package on/in it, but no floor mats.

The car has an Orange exterior with a black interior. Any idea on what the OEM floor mats look like? Is there a GT logo or a 40th edition logo?

Hi Stephen. As you see from the picture above, the 2004 Mustang GT OEM Floor mats have an embroidered 40th anniversary stitching on both sides of the original equipment floor mat and a Mustang logo at the end. Other than that, there is no major differences between them and other 199-2004 mats.

I don't have the color code for your interior, but you may want to check with one or more of your local Ford Dealers, in the parts department to see if they have any sitting in the back shelves.

You may be able to find one from perogie enterprises, or on ebay. I haven't seen any aftermarket reproduction floor mats for the 40th Anniversary Mustang, but there may be some out there somewhere.

If that fails, and all can find is the wrong color, you may be able to get carpet paint, or vinyl dye to get it looking right, but I'd test it out on a used, not so valuable mat, to see if it is going to work.

I can't speculate on exactly what you'll pay for the mats. But I've seen them here and there, from about $100 to $180 bucks for a pair.