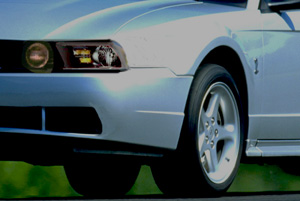 I got a 2003 Mustang Cobra and want to get a body kit maybe.

Can I use 2005 and later body parts to give my car a newer look without much customization?

Answer:
Unfortunately, using body parts from a 2005 Ford Mustang or any of the new Mustangs from '05 isn't going to work.

The 2005 Mustang was a clean sheet of paper redesign. As a result, nothing is going to be close to a bolt on, such as you'd see in a Mustang body kit.

However, when looking for some styles of body kits or just a front bumper/fascia that could update the look of your Cobra, you should look at some of the more horizontal and angular shapes, as the new Mustang nose has sharper creases, coupled to those round headlight treatments.

But for a strictly bolt-on change, you could look into these more modern, angular front fascia/bumpers. Nice, and pretty cheap too!

Note: You may want to middle click these links with your mouse, just in case they don't open into a new tab.

fits 99-04 Mustangs and has that crisper modern look.

gives you that more angular modern look in the air intake area, but still flows nicely around to the sides of the car.

While there are not a lot of the more modern style of body kit bumpers, this last one, by Sarona

is more aggressive looking than the other two, but updates the look of the car (particularly with the matching Side Skirts

The good thing about any of the combinations, is that they are strict bolt on's and much cheaper than a full body kit.

Join in and write your own page! It's easy to do. How? Simply click here to return to Restoration Forum.