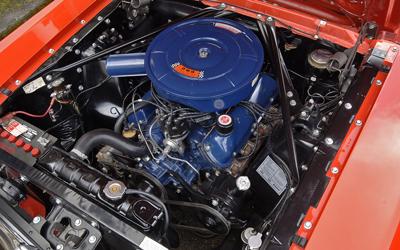 Hi, what a great site you have.

I am fairly new to Mustangs, but my dream car from childhood was always a 1965 Mustang Fastback, So the time has come for me to find and complete a Mustang restoration project.

I was wondering what engines, new or old, can be fitted to a 1965 Mustang Fastback and where can these engines be purchased ?

Thanks for your comments! The 1965 Mustang fastback has to be THE iconic Ford Mustang. There are many possible 1965 Mustang Fastback Engine Swap options.

While a big block 390 V8 became available in 1967, (I know I'm going to hear about this..) most people who I know that did the swap, didn't find it to be great for these early cars, due to the excess front end weight and heavy stress on the front end and brakes.

They don't handle well either.

There are a number of engines that will fit the 1965 Mustang fastback, with varying degrees of ease.

Small block Windsor and Cleveland V8 engines use the same engine mounts,so that's an easy one. And transmission and linkage choices are simple as well.

The 351W (Windsor) is a common swap for a number of reasons, assuming you don't want to limit yourself to original engines. The 351 is a big, strong engine, capable of producing a lot of horsepower and torque and taking abuse.

Speed parts are plentiful and several companies, like Hooker make bolt-in engine swap headers for the 1965 Mustang fastback, that fit so that you don't have any cutting to do.

If your car has the original Mustang 4 speed transmission, you can either opt for a later 1969-70 Z-bar clutch linkage, or convert to a cable operated system.

And if you're running a higher profile intake manifold, you can opt for the convertible style engine mounts, which drop the engine down about 1/2 inch.

A 1980's to 1990's 5.0 Liter Mustang engine and AOD transmission is also a popular 1965 Mustang Fastback Engine Swap. Not only are there a huge variety of go fast parts available, but you gain the added reliability of the EFI engine, along with an overdrive gear that will dramatically improve gas mileage.

The other issue, is that the newer 5.0 Mustang engine has a serpentine belt arrangement, which powers a reverse rotation water pump and outlet, that necessitates having a radiator which has a lower radiator outlet on the driver's side of the engine bay.

The dip stick also needs to be relocated into a front timing cover location and the original hole plugged.

Most people stick with the serpentine arrangement, rather than convert to an old style V-belt setup, as you'd also need to convert pulleys and install a new forward rotation water pump.

If you plan to use the old style z-bar for a standard transmission, you'll also need an adapter kit to locate the threaded z-bar pivot onto the side of the engine.

Since you're in the UK, finding engines for your 1965 Mustang Fastback Engine Swap can be more challenging.

Starting with used engines, you could certainly check out EBAy, but I'd start locally first.

There are many Ford Mustang enthusiasts in the UK and quite a number of early pony cars.

I'd recommend that you seek out the UK Ford Mustang car clubs as well as other Ford Car clubs. You may not have to go far to find just what you need.

If you want to go for a new crate engine, you have many choices, like Summit, Ford Racing and others that can supply you with a complete built small block engine that will turn your 1965 Mustang Fastback into a rocket!

Good Luck! Send us some pictures when you start your restoration project.